SAN JUAN, P.R. — Lin-Manuel Miranda only had to speak his character’s name — Alexander Hamilton — to bring the crowd to its feet.

It was Friday night in San Juan — the first performance, and also the opening night, of a 17-day run of “Hamilton” in Puerto Rico — and as soon as the crowd caught sight of the show’s 38-year-old creator and star, it drenched him in applause, forcing a momentary pause, the actors frozen mid-scene while the patrons unleashed a storm of appreciation born, of course, of fandom, but also of something deeper.

“Today Puerto Rico gave me more energy than ever in my life in that moment,” Mr. Miranda, speaking in Spanish, told reporters after the show. “I’ve never felt anything like that.”

“Hamilton” arrives in San Juan at a time when Puerto Rico is struggling — still recovering from the devastation of Hurricane Maria, facing chronic economic challenges and political turmoil, and now confronting an outbreak of violence that claimed the life of a well-known trap singer on Thursday. 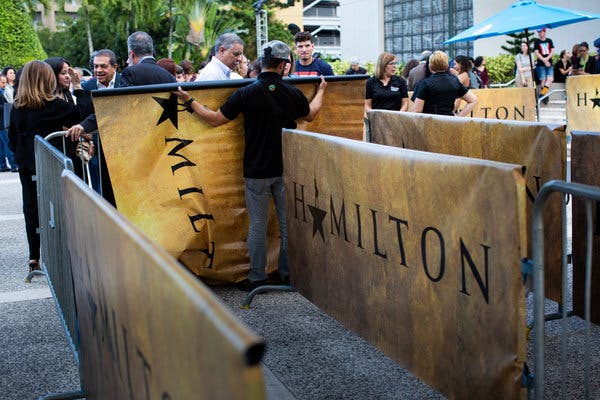 Mr. Miranda, born and raised in New York City to parents from Puerto Rico, is devoted to the island; he is hoping that the run of “Hamilton” here will call attention to both its needs and its riches. About 20 members of Congress, in Puerto Rico visiting areas damaged by the hurricane, came to see the show on Sunday.

The San Juan run is being staged at Centro de Bellas Artes Luis A. Ferré, a local performing arts venue, after the show’s producers decided at the last minute to relocate it from the University of Puerto Rico’s Río Piedras campus, citing concern about security in the event of protests.

Some of the potential for unrest was not directly related to “Hamilton” — the university is in the midst of contentious labor talks — but some was. Mr. Miranda’s support for a debt restructuring plan that led to a fiscal oversight board for Puerto Rico has brought him some criticism. He now supports debt forgiveness for the island, and on Friday he denounced austerity measures that raised costs for university students.

A handful of University of Puerto Rico theater students are interning with the production. Paola A. Martínez Orengo, a student who is helping in the show’s wardrobe department and attended the opening night festivities, said, “Of course I am saddened that it’s not happening at our university, but I am glad that I got to be a part of it.” 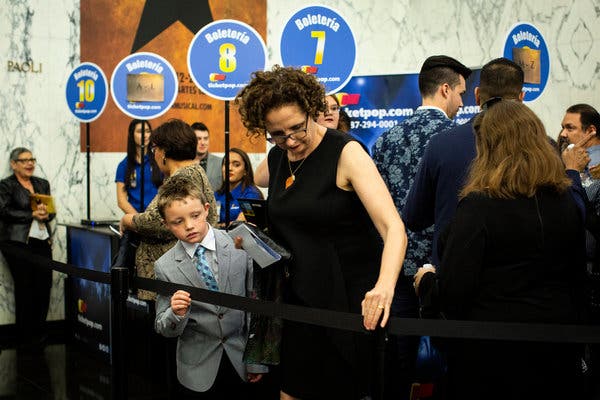 There was one small rally outside the show’s opening Friday night: About a dozen advocates of statehood for Puerto Rico gathered behind a banner, holding signs and shouting slogans. The protesters said they had no issues with “Hamilton” but were using the occasion to call attention to their concerns.

The production is a fund-raiser, expected to generate about $15 million for the Flamboyan Arts Fund, a Miranda family effort to support Puerto Rican artists. The money is being raised in part through the sale of several thousand tickets for $5,000 each; about a quarter of all the tickets are being sold for $10 each.

At the Friday night opening, there were a few boldfaced names from the mainland, including the television producer Shonda Rhimes, the musician Questlove and the television host Jimmy Fallon; a number of Puerto Rican celebrities, including the singer Lucecita Benítez, the comedian Raymond Arrieta, and the former Miss Universe Denise Quiñones; and the Spanish chef José Andrés, who was active in relief efforts here after the 2017 hurricane.

There were “Hamilton” alumni, including Leslie Odom Jr., who won a Tony as the original Aaron Burr, and a lot of people who played some part in the creation of the show, including Ron Chernow, the historian whose biography inspired it.

There were also a lot of people who just wanted to see “Hamilton.”

“The fact that Lin-Manuel is Puerto Rican makes us all here so proud,” said Melissa González, a lawyer who got tickets just two days ago. She attended with her husband, Carlos Surillo, also a lawyer, who cited the importance of celebrities to Puerto Rico’s cause. “Figures like Roberto Clemente, Raul Juliá and now Lin-Manuel have moved Puerto Rico forward,” he said. 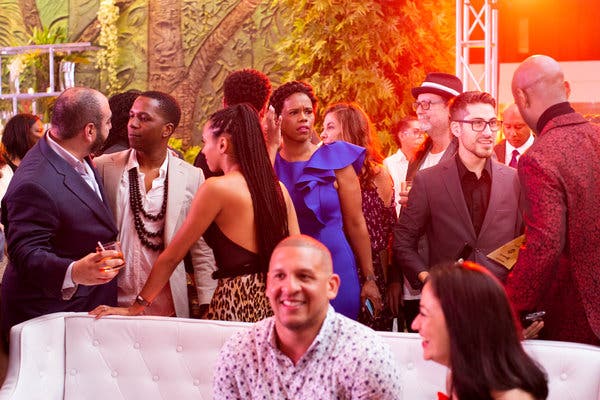 Some patrons came from considerably further away. Paul McQue, who is from Scotland, said he had already seen “Hamilton” once on Broadway, three times in Chicago and nine times in London, but had not yet seen Mr. Miranda play the lead role, so he came to San Juan.

After the show there was a party at Popular Center, a banking tower in San Juan’s financial district. There were typical Puerto Rican foods — gandules (pigeon peas), morcilla (blood sausage), trifongo (a mash of fried green and yellow plantain with yuca) and tembleque (coconut pudding) — and a covers band (“Despacito,” of course, as well as “Billie Jean”).

Behind the dance floor: a giant illuminated version of the bespoke icon of this brief run — a red-white-and-blue Puerto Rican flag with the silhouette of Alexander Hamilton, hand raised in the air, replacing one point of the flag’s star.

“Hamilton” is currently the biggest hit on Broadway, grossing around $3 million a week; since beginning performances in the summer of 2015, it has brought in $466 million there.

But Broadway is just one element of the “Hamilton” empire. The tour that starts in San Juan is the sixth simultaneous production of the show, which is also running in New York, Chicago, London and in two other touring productions. This new production will move from Puerto Rico to San Francisco for an extended run there. 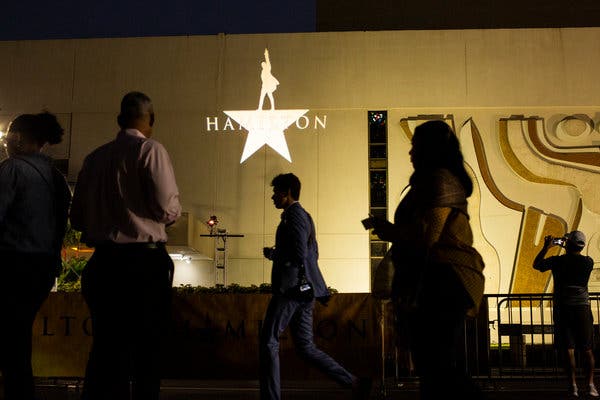 The Puerto Rico production is the first to feature Mr. Miranda in the title role since he wrapped up his run on Broadway in July 2016. He is only performing in Puerto Rico; when the show moves to California, another actor will step into the role.

Mr. Miranda brought his previous musical, “In the Heights,” to Puerto Rico in 2010, but his celebrity has increased markedly since then. Journalists from The Los Angeles Times, The Washington Post, The Chicago Tribune, Univision, Telemundo and many other outlets came to San Juan to cover the “Hamilton” opening. On Friday morning, Mr. Miranda was on “CBS This Morning”; on Jan. 15, an episode of Mr. Fallon’s “Tonight Show” will be broadcast from here.

“By coming here, in the most concrete possible way he is using the theater to intervene in the enormous difficulties this island has,” said Oskar Eustis, the artistic director of the Public Theater, the New York nonprofit where “Hamilton” began. “He’s pumping millions of dollars into the economy, and he’s drawing a spotlight to Puerto Rico — he’s using his megaphone for exactly what it should be used for.”

Talking with reporters, Mr. Miranda responded to questions on a handful of political issues. He called “absolutely monstrous” the possibility that the Trump administration might take money budgeted for disaster relief to pay for a wall along the Mexican border.

Asked about violence in Puerto Rico, he called it “a virus that is affecting all of the United States, and Puerto Rico at this moment.” But he also said, “I’m thrilled to welcome everyone to this island. They shouldn’t have reservations” about visiting.

Mr. Miranda, who waved a large Puerto Rican flag at the opening night curtain call, said afterward that one part of the show had become unexpectedly emotional — the song “Hurricane,” about a storm that hit St. Croix in 1772, newly resonant given the storm that hit Puerto Rico in 2017.

“I wrote that song years ago, and it’s very difficult to sing here,” he said. “I didn’t get through it the first time I did it on stage. I was able to get through it tonight.”